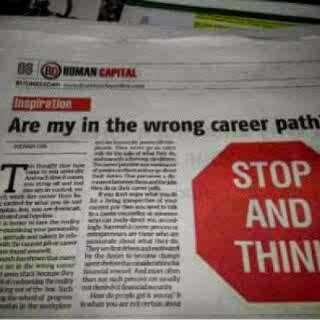 It’s that time of the month again when I scavenge for worthwhile posts from other blogs (and authors) that I can share with you – that’s the essence of Featured Posts. This month’s featured post forces us to re-think what we really mean by the word career. By the way, the image used in this post was something I picked up yesterday. Let me know if you got the joke.

As a child, my father once asked me what I wanted to be when I grow up. “A banker”, I replied. Without giving it much thought, I said “it is because I want to have plenty money”.
Almost two decades later, I have become the exact opposite of a banker. I have taken up a profession universally regarded as a service to humanity rather than a gateway to untold riches.

Recently, I have taken time to reflect on my words on that particular day. I have pondered why I simply wanted to be rich and nothing else. Could it have been that economic realities of times hadn’t gone unperceived by my little self and all I wanted was to beat the hard times? Or was I simply trying to be mainstream and go with the fad of the time? I don’t have an answer yet.
Even before the Union Jack was lowered and the green-white-green hoisted, two professions have always been top choice for Nigerian children to aspire to. Medicine and Law. Seemingly bright kids are either coerced or nudged on to study these courses in the University.
Most parents talk about the huge respect these professions attract as the primary reason why they are the best for anyone. I daresay that is a half-truth. The driving force behind it is appareled in economics. It is widely believed that doctors and lawyers are usually well off. At least, enough to lead a good life and also possibly provide financial support to their siblings.
This is not a bad thing in itself. However, when considered within the context of a money-driven society like ours, it becomes obvious that a problem is being created. A problem that bites back at society by creating a crop of professionals that are unconcerned with what they bring to their jobs but rather what their jobs bring to them.
Consider a situation in which a doctor is solely desirous of making money with no focus on career development. He/she may get rich but with limited or even obsolete skills. Correct patient care isn’t the concern of this doctor talk less of improvement.  This won’t be so tragic if majority of our country’s doctors do not fit this description.
Other disciplines/careers are not immune to this disease. The average Chemistry graduate has little or no concern about how he/she can become a reputable chemist but isn’t short on ambition to become the richest. How Nigeria’s young people morph from dreamers about professional achievements on entry into the university to mere paper chasers deserves to be classified as a world wonder. Maybe it is the economy. After all, economic hardship abruptly awakens a man in the middle of his dreams, in a pool of his own sweat. I know this from tens of fellow dreamy eyed medical students who wanted to be cardiologists, neurosurgeons, obstetricians and so on but are now focused on just survival.
The same economic hardship has redefined the average Nigerian professional as a person who wields several degrees, speaks highfalutin language and does a poor job in exchange for a high fee. The sum of the integrity, competence and relevance of a number of Nigerian professional is cos 90. In our society, the S.I unit of excellence is affluence. Know-how and wealth are now seen as being mutually exclusive by our so-called professionals.
I do not consider money a bad thing neither do I abhor its presence in my bank account. However, as a professional, I’m beginning to consider money as a thing of consequence. A secondary gain that follows a good career. I think that’s a good thing. I can concentrate on being better knowing that being able to make a decent living is inevitable.
It is foolish to argue that wealth is not an achievement when it is obvious that it is not within everyone’s reach. However, a professional should not pursue money at the expense of the profession. It is immoral.
If money is your sole purpose, start a trade. Start early too. To paraphrase Sister Lupita, none of your dreams are invalid. You must however not waste your already insufficient time becoming an engineer or an economist first.
However, if you have chosen to become a professional, then you owe it to yourself, your family, your community and your nation to aspire to be the finest there is.
Professionals build a nation. Businessmen and politicians are like the conductors of an orchestra who flail their arms in the direction they want the music to go. The players are the ones who do the hard work of producing the music. So are professionals. They are supposed to represent the core values of a nation, particularly hard work and integrity.
However, a professional corps such as ours is no different from the ruling class that we strongly detest, driven by avarice and in love with incompetence. There is little or no desire for improvement.
A few years after leaving medical school, I am still resisting the allure of Nigerian brand of professionalism, realizing the shallowness of the life it promises. I am not sure that anything will hurt me more than the realization that I didn’t become as good – if not better – as my American or Japanese colleagues simply because I didn’t give it my best shot due to my monetary pursuit. Even more when one realizes that they are well off too. It is also noteworthy that the economy is an excuse but not a very good one. The economy has never been great but W. Soyinka, C. Achebe and many other Nigerian professionals achieved international prominence as Nigerians. They are not known to be poor.
As I chose my path in life, banishment of the naive dreams of my childhood became imperative as I have realized the diametric relationship between the two. My dreams are still technicolor-ed. No grey areas. However, I have replaced the currencies that represented the pixels with integrity, top-notch ability, ground breaking work and service.
Fellow professionals, what are you waiting for?
Image credit:  Facebook
This post was featured from: http://tobiodetola.wordpress.com/

What The Woman In The Bus Said

When It’s Time To Switch Gears