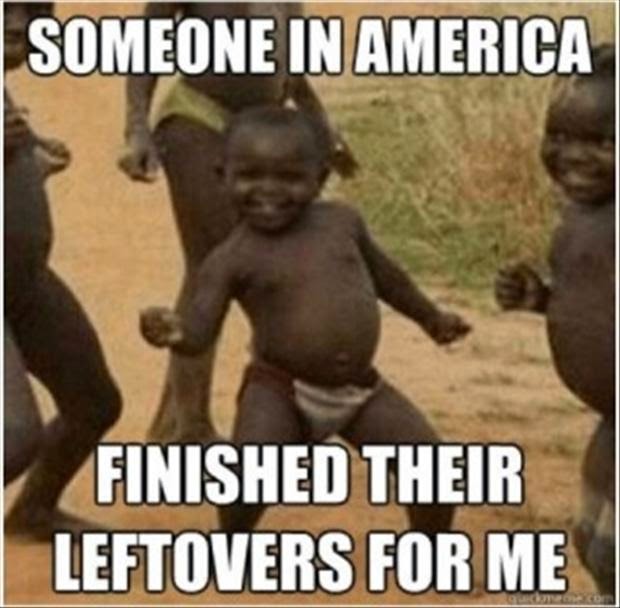 I saw something yesterday and decided to write about it today. That’s all.

Those who have listened to Chimamanda  Esega Adichie’s TED Talk on ‘The Danger of A Single Story’ will recall her saying something about a houseboy who lived with her family when she was much younger. The houseboy whose name was Fide (I hope I got the spelling right) was many times the subject of Chimamanda’s mum’s admonitions when it came to feeding; she would encourage her children to finish up their food because “Fide’s family was poor and could not afford such”.
For many of you reading this, this scenario is not entirely strange. At various times during our childhood, we have been told by our parents not to waste food. The definition of waste being: the inability to ‘clear your plate.’ Whether forcefully eating the food (and subsequently passing it out as faeces) proves to be a better investment than putting excess food away in the garbage, is an issue for another discussion.
Yesterday, I stumbled across a meme that captured my thoughts on this age-long issue. It appeared however, that nobody seemed to connect with it. So I decided to make it into a post and share this rather unconventional thought. And this is the thought: If you really care about the poor, then feed them but don’t use them as an excuse to finish your food. I mean, it’s condescending and annoying, not including the stress of force-feeding someone who is already satiated. Worse still, the excess food gets wasted in the toilet as fried beans faeces.
If you are so concerned about the poor, then you should help them by action rather than by inference. Assign a portion of your monthly feeding allowance or food items to feeding the poor and the hungry. And if your child cannot finish that meal, that’s why you have refrigerators (and PHCN). Whatever you do, by all means, do not inculcate a culture of guilt and pity into your children. I hope that you all as next-generation parents will take note of that.

With this understanding, I present you the meme >

If you have made up your mind to help the poor and feed the hungry, you should read So You Think You Are Helping The Needy? before dashing ahead.