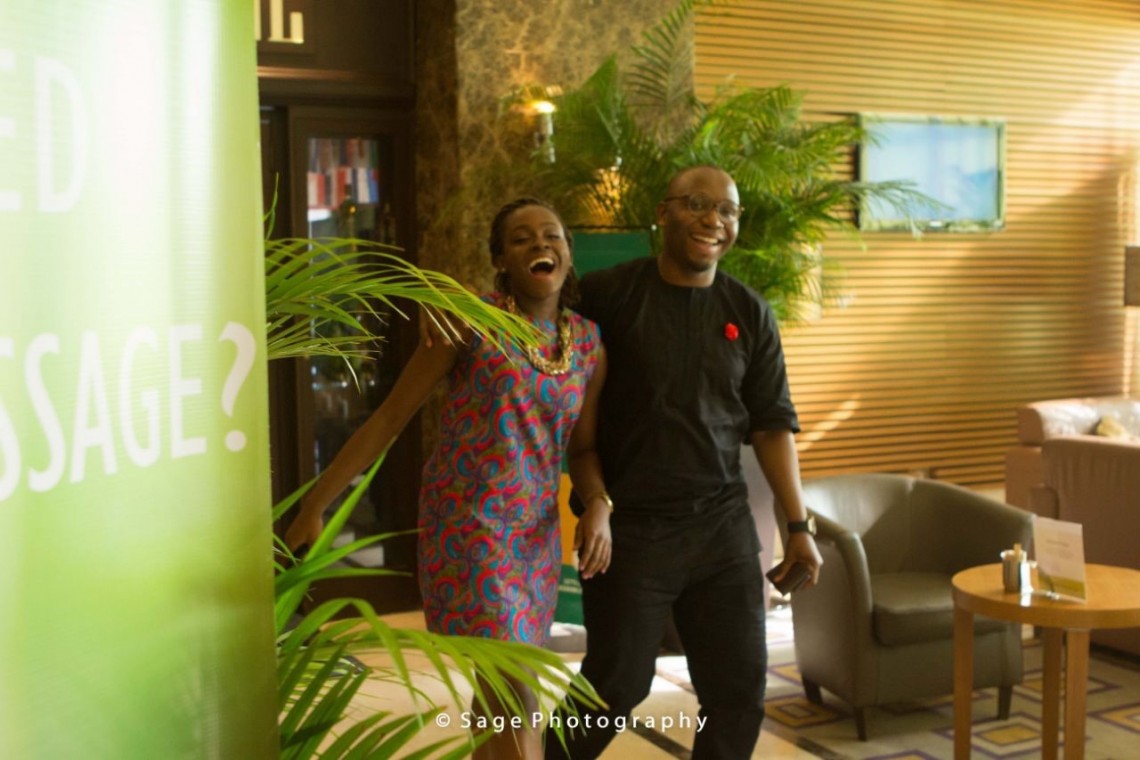 If Anything Can Go Wrong – A Proposal Story

“If anything can go wrong, it will”

The above phrase (abridged) has come to be known as Murphy’s Law. And I came to appreciate its importance a few weeks back. First of all, let me say that this is no convention challenging article. It’s a love story, actually, a proposal story.

When Dayo sent me a message on BBM that ‘ring things’ was underway, I was elated. For one, it was only good news I had heard in weeks. Secondly, we’d all been waiting (on behalf of the girl) for him to pop the question – they had been together for close to four years.

The plot was a simple one and had been worked out before I got involved. He was to take her out on the pretext of checking out some ‘possible venues’. Then at the designated venue, the manager will approach both of them, comment on Lolade’s dressing and ask her to pose for photos with some models as was ‘the tradition’. As you may have guessed, we, the friends, were the models and would appear holding the ‘Marry Me?’ placard. Dayo would go on one knee and make a proposal or in the words of The Godfather, make a deal she couldn’t refuse.

D-day was a Sunday. The plan was to have the four friends and Lolade’s sister converge at Apapa Mall then head to Radisson Blu ahead of the couple. There we would ‘hide’ at designated places and await their arrival. Easy peezy.  Sage Photography had been commissioned for this task.

The only challenge so far had been figuring out how to get Lolade’s sister out of the house without raising questions in Lolade’s mind. To achieve this, Dayo was going to ask Lolade’s mum (yes, she was involved) to send her sister to the Mall to get some items, and then we could pick her up.

We were to be at the venue by 2pm. But as at that time, the photographer, Dayo and I were just setting out of our rendezvous point to join up with the girls at Apapa Mall. To make sure all was in order, Dayo placed a call to Lolade’s mum to get updates. It was then he was informed that Lolade and her sister just went to buy foodstuff at Apapa Mall. I could almost hear those Nollywood soundtracks playing in the car. The next few minutes saw Dayo simultaneously call and ping Lolade’s friends telling them to disappear from sight. It was like witnessing one of those military movies where the commander screams Abort, I repeat Abort. This continued for about fifteen minutes before we got the all-clear signal that Lolade and her sister were back home. We had just scaled the first unexpected hurdle.

By 2.30pm (thirty minutes behind schedule), we were waiting in front of Lolade’s house to pick up her sister. Bold move right? Since they had just been to Apapa Mall, it no longer made sense for her mum to send her sister back to Apapa Mall. Lolade would immediately sense mischief. So we took the risk of parking right in front of the house and have Lolade’s mum tell her sister to go pick up something outside. Oh boy! Lolade’s sister took forever to come outside and with each passing minute, I half-expected Lolade to appear and BANG! The game would be over faster than we could say Hi. Thankfully she didn’t.

Eventually,Lolade’s sister  she did come out and we were off to Apapa Mall to meet up with the girls. With the calmness of a grand master, Dayo proceeded to brief Lolade’s sister about the proposal. It was the first time she was hearing about it. 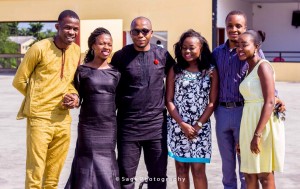 The proposal team before take off from Apapa Mall

It was a few minutes after 3:00pm when we arrived at Radisson Blu Ice Cream Cafe – one hour behind schedule. I was billed to watch the Insomniacs Stage Play by 5:00pm, that explains why I was keeping track of time. But then if everything went according to plan,we should be done in an hour.

To prevent nasty surpirises, Dayo was to call me when they were within ten minutes of the venue. With that in mind, we immediately got to work scouting possible hiding spots. It was at this point that we encountered the first major hitch of the day: the walls were glass walls. That meant that it was impossible for us to sneak in from outside once the couple was seated. To make things worse, there wasn’t enough space inside to ‘hide’.

So I told Sage, the photographer, to discuss with the manager if he could help us out. Then like Mortal Kombat, we were delivered a finishing blow: “You cannot have anything here! We had an agreement” was what I heard the manager say to Sage. I turned round and asked the manager what was wrong. He went on to blab about how the pre-requisite for having such an event was to pre-order a cake. And since no cake was pre-ordered, we couldn’t hold anything. Not even snap a photo! I could hear more Nollywood soundtracks now. Earlier in the day, Dayo and I had joked about things not going according to plan. Now the shit just got real.

Nearby, the girls were already seated and chatting away unaware of the recent development. All the hours of planning had come to one sentence: You cannot hold anything here. In the midst of all that, my phone rang. It was Dayo. That could only mean one thing: they were ten minutes away. Actually, I was wrong, they were already approaching the gate!

Dayo: Hello Ife, how far? Can you chill for us at Radisson before you head for your play? (He was trying to establish an alibi for me as Lolade was in the car with him.)

Me: Yeah but there’s a little challenge.

Dayo: So what is it?

Me: We can’t use Radisson Blu anymore. Can’t explain the details but just keep driving somewhere, maybe ICF or something. I’ll get back to you.

As I would learn later, they were almost entering through the gate when we had that conversation. He literaly had to turn the car around. What explanation he gave Lolade for doing so and how he got away with it, I have no idea.

Improvisation on a fleek

From then onwards, Sage took over. Apparently, there was a backup plan for Four Points Hotel and he was able to improvise plans with Dayo over the phone. I reckon we must have exchanged close to 20 phone calls in the 10 minute interval it took to arrive at Four Points and all that while, we had to use my phone to avoid suspicion.

By the time we got to Four Points, Dayo and Lolade were already in. So there was no talk of hiding anywhere. Sage however came up with a brilliant idea. He suggested that Dayo take Lolade into the bar, which was shielded from the lobby. That would give us time to sneak in and take positions in the lobby. By the time, the couple would be coming out of the bar, we would spring up our surprise. And that’s exactly what we did.

There were doubts by now that Lolade would have figured out what was going on, considering the insane amount of phone calls Dayo had to make in that short period.

All is well, that ends well 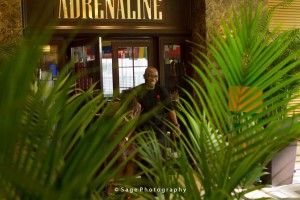 Dayo and Lolade emerging from the bar

Eventually, they came out of the bar and at the cue from Sage who was hidden behind a pillar, we got up at once from our various positions and blocked their path holding the placard – Marry Me? The surprise was complete! We had succeeded. 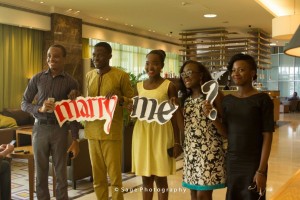 Holding the placard – Marry Me?

First was the surprise look, then the smile, and then the covering of her face with her hands while Dayo went on one knee and proposed. Thankfully, she never figured out what was coming despite the unforeseen challenges that sprang up last minute. I’ll probably credit that to the calmness with which Dayo handled the calls and himself. And oh, I mustn’t forget to mention that she was looking gorgeous too. 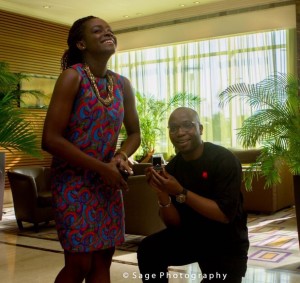 An offer she could not refuse. 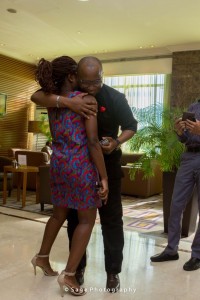 All is well that ends well

So that’s it. An unusual proposal story packed with adrenaline filled interruptions, which still ended well. I wish them a fruitful relationship leading up to marriage and a happy married life thereafter.

Nobody Posts A Sad Selfie 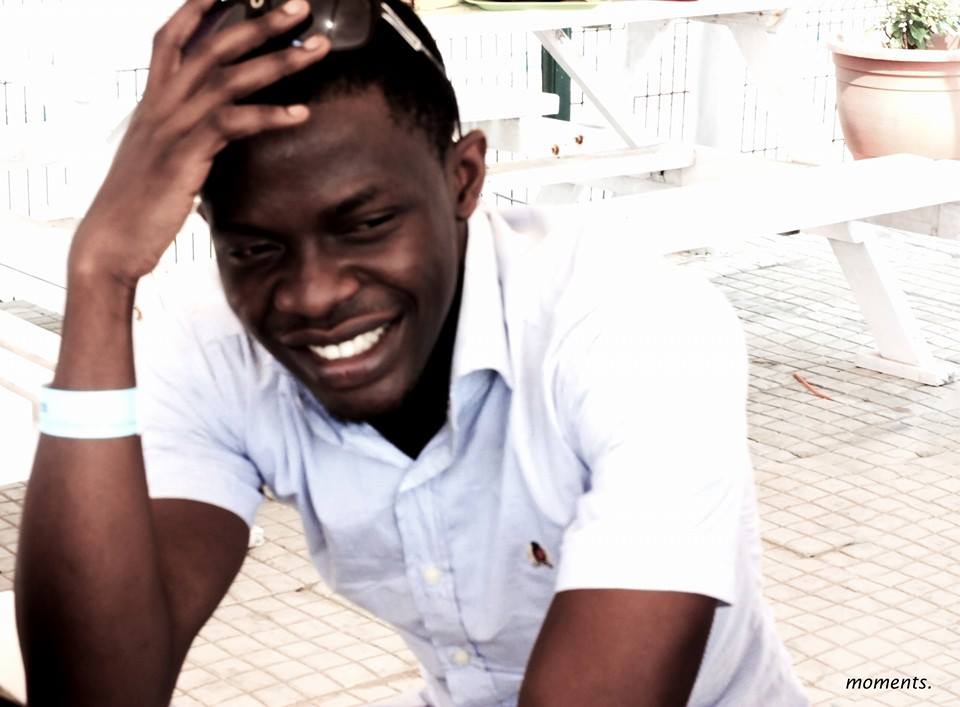